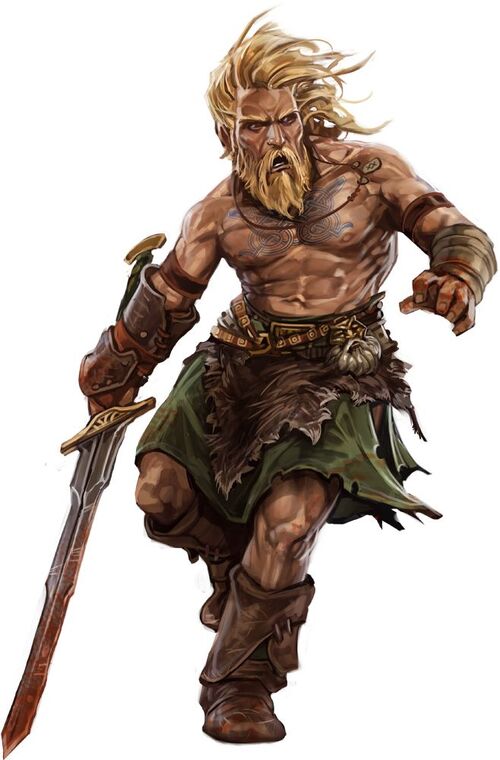 Wild & bloodthirsty berserkers lurk on the fringes of civilisation, ever pressing in through feral forays to snatch what they can before vanishing back whence they came. Considered little more than animals, these savages are beyond counting & only kept at bay by the stout shields of soldiers & their fear of the bright lights of the cities. This is the attitude of so many & it is so very, very wrong...

In vast Parth human tribes feud with one another over ancient grudges & cruel Elven encroachments, in soaring Gram stoic Goliaths wander the frozen mountaintops on unknowable quests, in broken Shrill Goblinoids band together as states that collapse in a few short months only to reform again in another few & in horrific Tuch the remnants of the Orcish Horde stands fast against the mad servants of the Dark Gods.

Those labeled Barbarian by the countries of the New Gods are "those who are not like us". These are the folk who cling to the Old Ways, a sharp reminder of life before the rise of the Homelands, a mirror most are too afraid to look into. But fear is alien to many of these mighty people! Passionate & proud are most, more than capable of not just surviving but thriving in the brutal lands they inhabit.

Barbarians make for terrifying close-quarters combatants, driven by ferocious rages and instincts honed by a lifetime of struggle. Those with innate gifts from their strange lands are more fearsome still, possessing of powers that remind their foes of the power of the natural world.

On your turn, you can enter a Rage as a Bonus Action. While Raging, you gain the following benefits if you aren't wearing Heavy Armour:

Your Rage lasts for 1 minute. It ends early if you are knocked Unconscious or if your Turn ends & you haven't attacked a hostile creature since your last Turn or taken damage since then. You can also end your Rage on your turn as a Bonus Action.

Once you have Raged the number of times shown for your Barbarian level in the Rages column of the Barbarian table, you must finish a Long Rest before you can Rage again.

While you are not wearing any Armour, your AC equals 10 + your Dexterity modifier + your Constitution modifier. You still gain this benefit whilst using a Shield.

Starting at 2nd level, when you make your first Attack on your turn, you can decide to Attack Recklessly. Doing so gives you Advantage on all Strength based melee weapon Attack rolls that Turn, but Attack rolls against you gain Advantage until the beginning of your next Turn.

At 2nd level you gain Advantage on Dexterity saving throws against effects that you can see, such as traps or spells. You do not gain this benefit if you are Blinded, Deafened, or Incapacitated.

At 3rd level you discover, understand or accept the Path that will define the nature of your inner fury as well as your future...

Whenever you gain this feature, you can also replace one of your Skill Proficiencies from any Class with another offered by the Barbarian Class at 1st level. This change represents your Skills atrophying as you focus on others.

Beginning at 5th level, you can Attack twice instead of once, whenever you take the Attack action on your Turn.

Starting at 5th level, your Speed increases by 10' whilst you aren't wearing Heavy Armour.

By 7th level, you have Advantage on Initiative rolls.

Additionally, if you are Surprised at the beginning of combat & aren't Incapacitated, you can act normally on your first Turn but only if you enter your Rage before doing anything else.

Beginning at 9th level, you can roll 1 additional weapon damage die AFTER determining the extra damage for a critical hit with a melee attack. You then add the result to the total.  If a weapon has more than 1 die for it's base damage (such as a Greatsword) then you roll 1 of those die, not both. This increases to 2 additional dice at 13th level & 3 additional dice at 17th level.

Starting at 11th level if you drop to 0 HP whilst Raging & don't die outright, you can make a DC 10 Constitution Saving Throw. If you succeed, you drop to 1 HP instead.

Each time you use this feature after the first the DC increases by 5. When you finish a Short or Long rest, the DC resets to 10.

Beginning at 15th level, your Rage ends early only if you fall Unconscious or you choose to end it.

Beginning at 18th level if your total for a Strength check is less than your Strength score, you can use that score in place of the total.

At 20th level you embody the power of the wilds. Your Strength & Constitution scores increase by 4 & your natural maximum for those scores is now 24.

Path of the Dead

At 3rd level, while you're raging, the first creature you hit with an attack on your turn becomes the target of spectral warriors, which hinder its attacks. Until the start of your next turn, that target has disadvantage on any attack roll that isn't against you, and when the target hits a creature other than you with an attack, that creature has resistance to the damage dealt by the attack. The effect on the target ends early if your rage ends.

Beginning at 6th level, if you are raging and another creature you can see within 30 feet of you takes damage, you can use your reaction to reduce that damage by 2d6.

When you reach certain levels in this class, you can reduce the damage by more: by 3d6 at 10th level and by 4d6 at 14th level.

At 10th level, you cast the Augury or Clairvoyance spell, without using a spell slot or material components. Rather than creating a spherical sensor, it invisibly summons one of your ancestral spirits to the chosen location. Wisdom is your spellcasting ability for these spells.

After you cast either spell in this way, you can't use this feature again until you finish a short or long rest.

At 3rd level, you gain the ability to use Spiked Armor as a weapon.

While you are wearing spiked armor and are raging, you can use a bonus action to make one melee weapon attack with your armor spikes against a target within 5 feet of you. If the attack hits, the spikes deal 1d4 piercing damage. You use your Strength modifier for the attack and damage rolls.

Additionally, when you use the Attack action to grapple a creature, the target takes 3 piercing damage if your grapple check succeeds.

Beginning at 6th level, when you use Reckless Attack while raging, you also gain temporary hit points equal to your Constitution modifier (minimum of 1). They vanish when your rage ends.

Beginning at 10th level, you can take the Dash action as a bonus action while raging.

Starting at 14th level, when a creature within 5 feet of you hits you with a melee attack, the attacker takes 3 piercing damage if you are raging, aren't incapacitated, and are wearing spiked armor.

Path of the Berserker

This is the path of most Barbarians, learning to harness their anger in ever more intense ways as they grow to understand & accept it.

At 3rd level you can go into a Frenzy when you Rage. If you do so, for the duration of your Rage you can make a single melee weapon Attack as a Bonus Action on each of your Turns after this one. When the Rage ends you gain one level of exhaustion.

Beginning at 10th level, you can use your Action to Frighten someone. Choose one creature that you can see within 30 feet of you. If the creature can see or hear you, it must succeed on a Wisdom Saving Throw (DC:  8 + your Proficiency Bonus + your Charisma modifier) or be Frightened of you until the end of your next Turn. On subsequent Turns you can use your Action to extend the duration of this effect on the Frightened creature until the end of your next Turn. This effect ends if the creature ends its Turn out of line of sight or more than 60 feet away from you.

If the creature succeeds on its Saving Throw, you can't use this feature on that creature again for 24 hours.

Starting at 14th level, when you take damage from a creature that is within 5 feet of you, you can use your Reaction to make a melee weapon Attack against that creature.

Starting at 3rd level, you emanate an aura while you rage. The aura extends 10 feet from you in every direction, but not through total cover.

If your aura's effects require a saving throw, the DC equals 8 + your proficiency bonus + your Constitution modifier.

At 6th level, your inheritance grants you benefits even when your aura isn't active.

At 10th level, each creature of your choice has the damage resistance you gained from the Primal Soul feature while the creature is in your Storm Aura.

At 14th level, the power of your birthright grows mightier.

You gain the ability to cast the Beast Sense & Speak with Animals spells, but only as rituals.

At 3rd level, when you adopt this path, you choose a totem spirit and gain its feature. You must make or acquire a physical totem object that incorporates a part of the totem animal. At your option, you also gain minor physical attributes that are reminiscent of your totem spirit.

Your totem animal might be an animal related to those listed here but more appropriate to your homeland.

Aspect of the Beast

At 6th level, you gain a magical benefit based on the totem animal of your choice. You can choose the same animal you selected at 3rd level or a different one.

At 10th level, you can cast the Commune with Nature| spell, but only as a rituals.

At 14th level you gain a magical benefit based on a totem animal of your choice. You can choose the same animal you selected previously or a different one.

Path of the Hollow Heart

At 3rd level, while you're raging, the first creature you hit on each of your turns with a weapon attack takes extra psychic damage equal to 1d6 + half your barbarian level.

At 3rd level, if a spell has the sole effect of restoring you to life or undeath, the caster doesn't need material components to cast the spell on you.

Starting at 6th level, if you fail a saving throw while you're raging, you can reroll it, and you must use the new roll. You can use this ability only once per rage.

At 10th level, as a bonus action, you unleash a battle cry infused with insane fervour. Up to ten other creatures of your choice within 60 feet of you that can hear you gain advantage on attack rolls and saving throws until the start of your next turn.

Once you use this feature, you can't use it again until you finish a long rest.

Community content is available under CC-BY-SA unless otherwise noted.
Advertisement